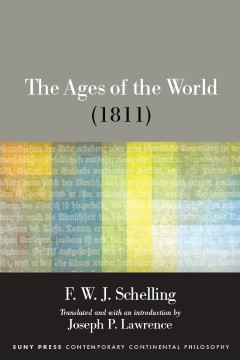 In 1810, after establishing a reputation as Europe’s most prolific philosopher, F. W. J. Schelling embarked on his most ambitious project, The Ages of the World. For over a decade he produced multiple drafts of the work before finally conceding its failure, a “failure” in which Heidegger, Jaspers, Voegelin, and many others have discerned a pivotal moment in the history of philosophy. Slavoj Žižek calls this text the “vanishing mediator,” the project that, even while withheld and concealed from view, connects the epoch of classical metaphysics that stretches from Plato to Hegel with the post-metaphysical thinking that began with Marx and Kierkegaard. Although drafts of the second and third versions from 1813 and 1815 have long been available in English, this translation by Joseph P. Lawrence is the first of the initial 1811 text. In his introductory essay, Lawrence argues for the importance of this first version of the work as the one that reveals the full sweep of Schelling’s intended project, and he explains its significance for concerns in modern science, history, and religion.