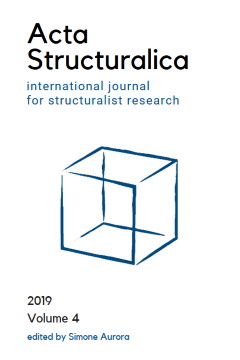 The notion of opposition in linguistics

1This short text —a summary of Pos's intervention at the 11th International Congress of Psychology in Paris in 1938— is best understood as the visible part of a number of extensive discussions and debates which Pos conducted orally and informally with leading structuralist figures, most notably Roman Jakobson (cf. Jakobson 1973). Because of this particular status as a sort of embedded witness of unrecorded scientific discussions —a role which is in many ways characteristic of Pos's entire work and contributions (cf. Flack 2013)—, and despite its very concise and vague nature, "The notion of opposition in linguistics" can be considered as a key text of interwar structuralism (cf. Salverda 1991).

2What stands out in particular is its attempt to ground the notion of opposition philosophically, all while recognising its origins in linguistic thought, or rather, in the practice of linguistic analysis and in the early structuralist models of language. As has often been pointed out (e.g. Fontaine 1994, Flack 2018), Pos was one of the first thinkers to seek to provide a philosophical underpinning to structural linguistics, and the nature of his effort is made particularly obvious here.

3No less interestingly, despite taking up here one of the key notions of the Cours de linguistique générale, Pos does not tie the concept of opposition exclusively, or indeed explicitly, to Saussure, but rather to "recent research" more generally. Although some of the vocabulary employed here by Pos is indeed saussurean, it is clear that it is a much larger tradition, including in particular the phonology of the Prague school, which Pos is referring to here. As such, Pos's text is an invitation to think more broadly about the notion of opposition, its origins and its function within structural linguistics and structural thought.

4On its own, the present text does not, of course, provide much philosophical insight neither into the details of Pos's conception of opposition as it is used in structural linguistics, nor on its more general significance and theoretical implications. Such insights, however, can be gained by turning to Pos's other writings, whether his thesis on the "Logic of Language Sciences" (Zur Logik der Sprachwissenschaft, Pos 1923) or further texts on structuralism and the philosophy of linguistics (Pos 1939, Pos 2010[1939]). Another promising path is Merleau-Ponty's reception and treatment of Pos's philosophy of language (Merleau-Ponty 1952). In both cases, the neo-hegelian bent of Pos's concept of opposition becomes more obvious, along with its inscription in longstanding debates going back to German idealism.

The notion of opposition in linguistics [1938]

5Recent research has revealed the important role of opposition in all layers of language, from phonology up to syntax. Opposition is one of the principles that make up the language system.1

6The discovery of this fact has been a great stimulus to linguistic research and has profoundly changed the method of linguistic research: instead of meticulously recording isolated facts, its aim is to establish an order which allows one to see structures. The explanation of static and historical facts has been profoundly influenced by this new method.

7Psychology and philosophy have a great interest in following this development of linguistics, which in turn can be deepened through this contact.

9Opposition is not an isolated fact: it is a structural principle. It always brings together two things that are distinct, but which are linked in such a way that thought cannot pose one without posing the other. The unity of opposites is always formed by a concept, which, implicitly, contains the opposites within it and divides into explicit opposition when applied to reality. 182 concrete. The content of the opposition is posterior to the form and concept from which it originates.

10Opposition in linguistic facts is not a scheme that science introduces to master the facts, and which would remain outside them. Its importance goes beyond the epistemological order: when linguistic thought arranges facts according to the principles of opposition and system, it meets a thought that creates these facts themselves.

11II) It follows from this for psychology that the empiricism of facts isolated from consciousness needs to be complemented and supported by a theory of the unconscious factors that determine the systematic structure of these facts. The rational unconscious, the creator of structures, must serve as the basis for the explanation of the scattered and fragmentary facts of individual consciousness. Linguistics, without abandoning the help it receives from psychology, is led by its own evolution to recognize that thought and psychic life are not two completely distinct essences.

12Discussion:
K. Bühler (Vienna)2 points out that oppositions are only one element of the structure and that there are many other relationships than oppositions.

Pos Hendrik (2019) „The notion of opposition in linguistics“. Acta Structuralica 4.